Louis XIV was quite fond of warring and a lot of warring inevitably leads to a lot of veterans and invalids. Those who were lucky enough to return alive and in one piece after a campaign, could take up work… but what about those who lost a limb or were injured in a way that prevented them from caring for themselves afterwards?

The Sun King, like those before him, wanted to provide aid for the veterans of war, but not just out of gratitude for their service. Disabled veterans roaming the cities were a huge problem. Each war left quite a lot of disabled soldiers behind and those roamed Paris in search for something to do. Some found work, a lot of them became beggars or tricksters. They regularly got into brawls, quite dangerous considering they were trained military men. There were a lot of complains about their behaviour… and it did not look pleasant either to see men, who served the Kingdom, begging along Pont-Neuf.

The traditional way to solve the problem, was to relocate the invalids to various abbeys, where they ought to live as so-called oblates, people who are part of general society, but have affiliated themselves with a religious institution of their choosing. The problem was, that most, of course, did not chose the institution or religious life at all. They were military men and not monks. Thus they were not inclined to follow the strict rules of monastery life either… and that caused problems again. The clergy complained of them disturbing the religious order in the institutions and, while they did not cause trouble on the streets anymore, they were causing trouble in the monasteries.

A new solution was needed, Louis XIV knew that, and he knew that all the warring he had in mind to do, would not make the problem smaller. The whole veteran situation was also quite the stain on the image of a glorious army. The Sun King had already in 1659, after the Thirty Years’ War and the war with Spain, in mind to create a institution to host wounded and disabled soldiers. He planned to do what Cardinal de Richeleu had done with the fortress of Bicêtre, which was taken down and rebuilt as a hospital for disabled soldiers. The King’s plan to create such a place did not materialise until 1670 however. (By then the Bicêtre was less a place for invalids and more a place to hide people who were not desired to be part of the general society, like beggars, vagrants and lunatics. They also treated syphilis there on orders of Louis XIV.)

With an ordonnance royale in 1670, the creation of a new home for “those who have given up their lives and lavished their blood in defense of the monarchy … (to) spend the rest of their days in tranquillity” went underway.

The chosen location was the Plaine de Grenelle, back then a suburb of Paris, and the chosen architect was Libéral Bruand. Monsieur Bruand was back then especially known for the creation of one particularly feared building, the Salpêtrière. Rather beautiful on the outside, the Salpêtrière was a former gunpowder factory turned into a hospital, hence the name, on behest of Louis XIV, to house the ‘poor women’ of Paris and ‘poor women’ meant women who were epileptics, or learning disabled, or mentally ill, or generally poor. It was also a prison for prostitutes, with terrible living conditions, a huge rat population and only a slim chance to ever get out.

In first, it was planned to only erect some barracks, but Monsieur Bruand’s design of a large building with a church and courtyards, swept Louis off his royal feet. A hospice, as a sort of retirement home, a military hospital, a factory for uniforms and workshops, all behind one glorious Sun King worthy facade. 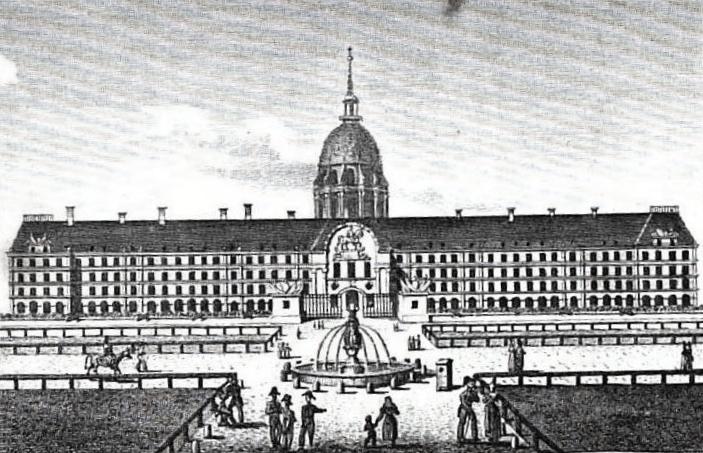 Work to make the area suitable for construction began in March 1671 and the first stone was laid on 30 November in 1671. Monsieur Bruand’s design was inspired by the Parisian hospitals and the Spanish Escurial, Philip II’s royal monastery palace near Madrid. A central royal cour d’honneur, perfect for military events, flanked by wings, which in turn lead to smaller cours flanked by wings, all of it crowned by a church. Thanks to the assistance of Louvois, who was quite particular to the project, the construction went in a swift and the required building materials were brought along the Seine pretty much to the construction side itself. (To where Pont-Alexandre is now.) The first parts of the Hôtel des Invalides were ready by 1674 and its inauguration celebrated with much pomp. Louis XIV himself welcomed the first dwellers in their new home.

By the end of the 17th century, Les Invalides was home to around 4000 former soldiers, which were divided in different companies. All that were able to perform some sort of profession, were assigned to a workshop. Soldiers who had been severely wounded or were still recovering from sever wounds, were placed in hospital part of the building complex and taken care of.

The work on the church had however not begun by then. And it was decided, not just to build one church, but two. One, Saint-Louis-des-Invalides, for the use of the occupants and the other, originally called chapelle royale des Invalides and now called dôme des Invalides, for the use of the royal family. Louis XIV wanted to be able to hear mass together with his soldiers, but for reasons of etiquette, those who fought for him could not possible enter the church through the same gate as him. It was planned to build a church with two gates, one for the royal family, one for the soldiers… but that plan was put aside in favour of building two connected churches.

Louvois was not very fond of Colbert and Monsieur Bruant was a protégé of Colbert. Thus Bruant was ordered to work on different things first and in the end, the royal church was entrusted to someone Louvois liked more, Jules Hardouin- Mansart, who was then occupied with the construction of the entrance pavilions and the infirmaries.

As Colbert, who had the say in how much money was spent on the project, died in 1683, Louvois took over and quadrupled the amount, which speeded the work up quite a bit. Louvois was rather invested in the whole thing, because he intended to be buried under the golden dome of the royal chapel. At the time of his sudden death in 1691, his widow received permission by Louis XIV to have him buried there, but the church was still not finished. Louvois’ remains were instead brought to Saint-Louis-des-Invalides, until his final resting place was finished…. that never happened. Louis XIV, probably on behest of Madame de Maintenon, who did not like Louvois one bit, did not provide the funds needed for Louvois’ planned mausoleum. The body of Monsieur de Louvois was removed seven years later from Saint-Louis-des-Invalides and instead buried at the couvent des Capucines.

As the keys for Les Invalides were handed over to Louis XIV, on 28 August 1706, the royal church still was not finished… it took another two years until the dome crowned church was finished. The chapelle royale des Invalides borders directly on Saint-Louis-des-Invalides. Both churches are connected and share a window, from which one can look into one from the other. Both churches are dedicated to Saint Louis aka Louis IX, who was King of France from 1226 to 1270 and canonised in 1297. Including the wood-framed dome, the chapelle royale des Invalides is 107 metres high. Under the outer frame of the dome, are two domes of limestone, with large windows to enable natural lighting. They are decorated with frescoes of Saint Louis, saints and apostles. 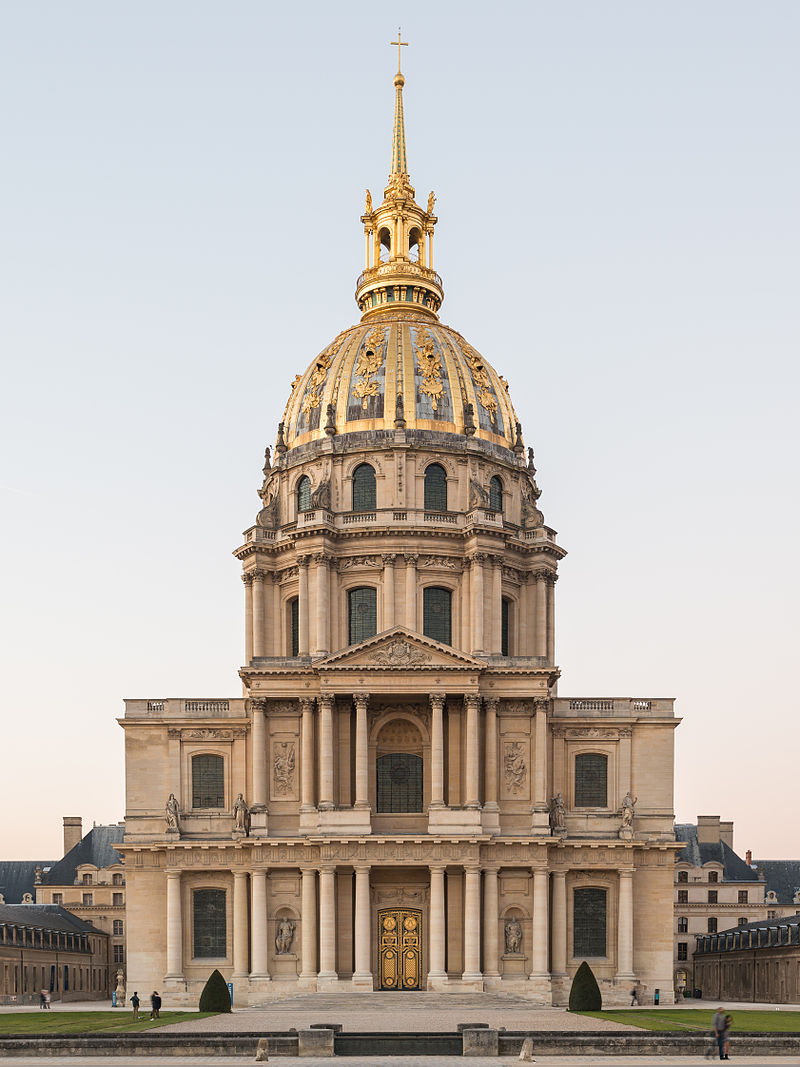 Once finished, the hôtel des Invalides became a favourite place for many Parisians and also for Louis XIV. Many ceremonies took place there, which in turn attracted many visitors as well. Louis XV did not care much for it at all. Louis XVI only visited on some occasions.

Les Invalides played quite the role in the storming of the Bastille in 1789. Before the people marched on the Bastille on 14 July, they marched on Les Invalides in the morning of the same day, aware that, down in the cellars, many weapons were stored. Those weapons, 32000 rifles and 27 guns, were then used to storm the Bastille. Les Invalides was renamed hôtel national des militaires invalides during the French Revolution and carried on to be a home for veterans and disabled soldiers. It was a spacial place for Napoleon, who used it to gain the support of the soldiers and held many ceremonies there.

Napoleon wanted to be buried at the shores of the Seine. He died in exile on Saint Helena in 1821 and to grant him his wish Louis-Philippe I, King of the French from 1830 to 1848, requested in 1840 that Napoleons remains would be brought from Saint Helena to France to be buried at Les Invalides . For that, a crypt was created straight beneath Louis XIV’s dome, that had been gilded by then. The construction of the crypt took twenty years and the way Napoleon’s tomb is placed, requires visitors to either bow down to him or look up to him in order to see the sarcophagus.

Les Invalides remained mainly a retirement home for veterans until the 20th century. In 1872, the musée d’artillerie moved in and was joined by the musée historique des armées in 1896. In 1905, they were merged into today’s musée de l’armée. Most of the veterans were relocated to smaller institutions in the Paris area, because the change to a mainly conscript army in 1872, greatly reduced the numbers of veterans who were qualified, having served 20 or more years, to live at Les Invalides and thus the huge building was too vast to still serve its original purpose.

Today’s Institution Nationale des Invalides still hosts some veterans, about one hundred, in a retirement home, with a a medical and surgical centre and a centre for external medical consultations.

This site uses Akismet to reduce spam. Learn how your comment data is processed.

~In bed with the Sun King~
Out now:
Amazon UK Amazon US
Amazon FR Amazon DE

Buy me a coffee!